A 2-Bit Asynchronous Binary Counter Fig1-1 shows a 2-bit counter connected for asynchronous operation. Notice that the clock (CLK) is applied to the clock input (C) of only the first flop-flop, FF0, which is always the least significant bit (LSB). The second flip-flop, FF1, is triggered by the ̅Q0 out-put of FF0.FF0 changes state at the positive-going edge of each clock pulse. But FF1 changes only when triggered by a positive-going transition of the ̅Q0 output of FF0. Because of the inherent propagation delay tie through a flip-flop, a transition of the input clock pulse (CLK) and a transition of the ̅Q0 output of FF0 can never occur at exactly the same time . Therefore, the two flip-flops are never simultaneously triggered, so the counter operation is asynchronous.

It works exactly the same way as a two-bit asynchronous binary counter mentioned above, except it has eight states due to the third flip-flop. 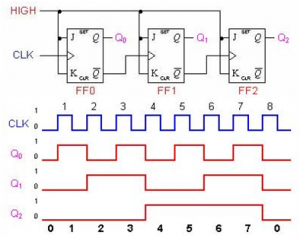