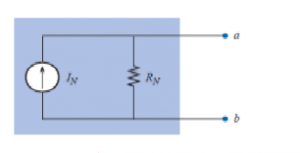 Preliminary:
1. Remove that portion of the network across which the Norton equivalent circuit is found.
2. Mark the terminals of the remaining two-terminal network.
RN:
3. Calculate RN by first setting all sources to zero (voltage sources are replaced with short circuits, and current sources with open circuits) and then finding the resultant resistance between the two marked terminals. (If the internal resistance of the voltage and/or current sources is included in the original network, it must remain when the sources are set to zero.) Since RN = RTh, the procedure and value obtained using the approach described for
ThÃ©venin's theorem will determine the proper value of RN.
4. Calculate IN by first returning all sources to their original position and then finding the short-circuit current between the marked terminals. It is the same current that would be measured by an ammeter placed between the marked terminals.
5. Draw the Norton equivalent circuit with the portion of the circuit previously removed replaced between the terminals of the equivalent circuit.