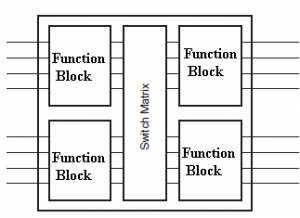 The function blocks has programmable interconnections. A switch matrix is used for function blocks to function blocks interconnections. Further, switch matrix in a CPLD may or may not be fully connected. This shows that, some of the connections between function block outputs and inputs are not supported in the CPLD. The complexity of a typical PAL device is around few hundred logic gates whereas the complexity of CPLD is around tens of thousands of logic gates. The CPLDs has predictable timing characteristics hence are suitable for critical control applications and other applications where a high performance level is required. Further, due to low power consumption and low cost, CPLDs are mostly used for battery-operated portable applications such as mobile phones, digital assistants etc.