As shown in figure below primary of transformer is connected to ac mains supply with which SCR becomes forward bias in positive half cycle. T1 is triggered at an angle α, T1 conducts and voltage is applied across R. 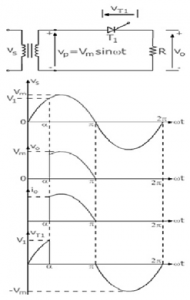 The load current i0 flows through 'R'
The waveforms for voltage & current are as shown above.
As load is resistive,
Output current is given as,

Hence shape of output current is same as output voltage
As T1 conducts only in positive half cycle as it is reversed bias in negative cycle, the ripple frequency of output voltage is-
fripple= 50 Hz (supply frequency)

Average output voltage is given as, 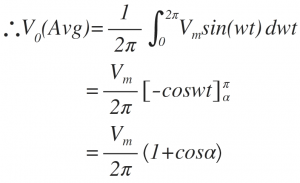 Thus, power & voltage can be controlled by firing angle. 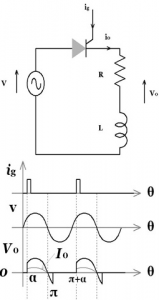 Figure above shows the single phase half wave rectifier with RL Load.