Hence, number of equations based on KCL will be total number of nodes minus one.That is, in the present context, we will have only two KCL equations referred to as node equations. For applying KCL at node 1 and node 2, we assume that all the currents leave these nodes as shown in below Figures.

Applying KCL at node 1 and 2, we find that

In order to understand the concept of a supernode, let us consider an electrical circuit as shown in Fig. 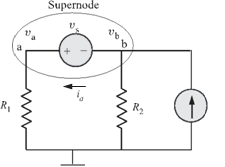 To account for the fact that the source voltage is known, we consider both a and b as part of one larger node represented by the dotted ellipse as shown in Figure.

We need a larger node because a and b are dependent. This larger node is called the supernode.

Applying KCL at nodes a and b,

Adding the above two equations, we find that,

When we apply KCL at the supernode, mentally imagine that the voltage source is removed from the the circuit of Figure but the voltage at nodes a and b are held at and respectively. In other words, by applying KCL at supernode, we obtain

The equation is the same equation. As in supermesh, the KCL for supernode eliminates the problem of dealing with a current through a voltage source.