In PFWR, for both the half cycles output is produced & in one direction only. The diagram below shows an inverting type of Precision FWR with positive output. It is also called as absolute value circuit because output signal swing is only in positive direction. So we get absolute value of input signal. 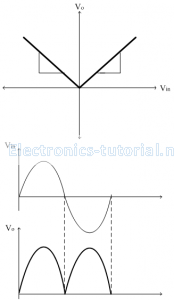