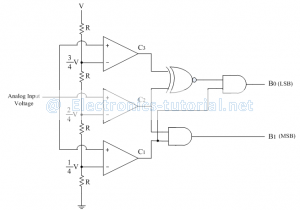 The three op-amps are used as comparators. The non-inverting inputs of all the three comparators are connected to the analog input voltage. The inverting terminals are connected to a set of reference voltages (V/4), (2V/4) and (3V/4) respectively which are obtained using a resistive divider network and power supply +V.
The output of the comparator is in positive saturation(i.e. logic 1), when voltage at non-inverting terminal is greater than voltage at inverting terminal and is in negative saturation otherwise.
The following table shows the comparator outputs for different ranges of analog input voltages and their corresponding digital outputs. 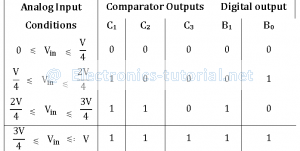 Advantages:
1)It is the fastest type of ADC because the conversion is performed simultaneously through a set of comparators, hence referred as flash type ADC. Typical conversion time is 100ns or less.
2)The construction is simple and easier to design.

Disadvantages:
1)It is not suitable for higher number of bits.
2)To convert the analog input voltage into a digital signal of n-bit output, (2n – 1) comparators are required. The number of comparators required doubles for each added bit.